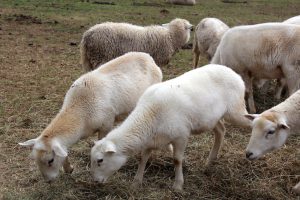 Guiding Question: How did shepherds do their jobs?

Procedure: Review the story of Abraham and Lot. Explain to students how in the time of Abraham people like Abraham and Lot had flocks of animals – especially sheep- that was their “wealth” and also helped provide food and clothing for them. Abraham and Lot would have used younger relatives or employed shepherds to care for their sheep. Have a “shepherd” (someone dressed as a Bible time shepherd) share with the class the following information about their trade. Shepherds had three basic tools they used – a rod, a staff and a sling. The rod was basically a two to four foot stick resembling what we would call a club or walking stick today. It was used to protect sheep from wild animals. The staff was a long stick with a hook at the top. The hook was used to help heard sheep or to pull them to safety or to hold them in place for shearing. The bottom of the staff often had a small scoop. The shepherd would pick up soil with the scoop and throw it at a sheep who was wandering away to get its attention. The sling was used for killing wild animals who attacked the flock. A skilled slinger could sling a stone with the impact of a bullet from a gun. If you have real sheep, have the shepherd demonstrate some of the techniques. Using the leather scraps and laces, have each student make a sling. Using ping pong balls instead of rocks, allow the students to go outside and practice slinging their slings in an attempt to hit the “lion” (stuffed animal) attacking their sheep.

Supplemental Activity: Have more advanced students research other possible occupations during the time of Abraham. Have them share their findings with the class or other interested group.