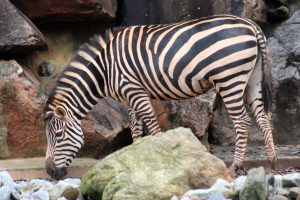 Guiding Question: For each letter of the alphabet, can you think of one or more animals whose name starts with that letter?

Materials: No special materials needed. (Although, you may want animal photos for review.)

Procedure: Review the story of Creation, focusing especially on Adam naming the animals. Review with students the idea of letters corresponding to sounds. Give examples of animals and the initial sound and letter of each (Tiger=T). Depending on the size of the group and the mastery of the skill, place students in one or more circles. Have students slap their knees, clap their hands, snap the fingers on their left hands and then their right. (Depending on the age of the students, you may have to vary this to omit finger snaps and replace with clapping or another easier motor skill.) Once students are in the same rhythm, have the first student say “My name is Adam and I named the [alligator or other animal that starts with an ‘A’] with an ‘A’.” The next student would have the letter “B” and would say, “My name is Adam and I named the [bear or other animal that starts with a ‘B’] with a ‘B’.” Players continue going around the circle and progressing through the alphabet.