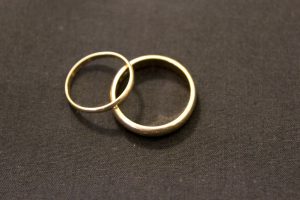 Procedure: Your students will be entering the story of Jacob, Laban, Leah and Rachel today. Have actors representing Jacob, Laban, Leah, Rachel and a few groomsmen and bridesmaids. If you have enough costumes, also dress the children in them. Take the children to a location outside of the wedding area. Have Jacob and Laban negotiate the bride price for Rachel.(Have them go back and forth about animals – the normal bride price first, but since Jacob probably has no animals of his own at this point, have them settle on the years of labor) Once it is agreed upon, have them write it on the “parchment” paper and sign it. Jacob and Laban should quickly run to the wedding location. Have one of the bridesmaids or groomsmen escort the students slowly to the wedding area. As they walk have the guide explain to the students that in Bible times, people did not get to choose whom they would marry. The bride’s and groom’s parents would often arrange marriages between their children – sometimes at very young ages. Jacob was on his own at this point and could negotiate to marry Rachel who he thought was beautiful. In most families, the girl/woman had no rights to refuse to marry the man her parents had chosen. The contract negotiations changed over time, but often included the time of the marriage (seven years from then in the case of Jacob), where the wedding would take place (usually the home the groom was about to put together and in less migratory times actually build) and later instead of the groom paying the bride’s family some countries switched to the bride’s family paying the groom.

Once the students arrive at the wedding (inform them their walk must have been long, because it is seven years later!) have them sit on the floor around the table tops placed flat on the floor (no legs on tables). If you want to get very accurate, consider having ‘servants” who wash the guests feet and give them “fancier” clothes for the wedding. Explain to the students that wealthy people often provided special wedding garments for the guests. Once the students are settled, have a rather loud group cheering and laughing enter the room. The group should have the bridesmaids carrying their “lit” lamps, the groomsmen carrying their “torches” and the bride and groom with her father behind her. Make sure Leah is heavily veiled so the students can’t tell it isn’t Rachel. Have someone say something to the effect of you are now married and then have Leah and Jacob leave the room.

Begin serving the wedding “feast” to the students. Have one of the wedding party explain to the students that often the wedding banquet would last for days. Make sure the person mentions that in those days there was no “kiss” at the end of the ceremony and the groom did not see the bride’s face until they were on their “honeymoon” (to keep it g rated). Suddenly, outside of the room, have Jacob scream an angry scream and drag Leah back into the room to confront Laban about his trickery. Follow the Bible for dialogue. Have Rachel emerge from outside of the room, looking embarrassed. Some scholars think Jacob was allowed to marry Rachel immediately as long as he promised to work the additional years, while others think he had to wait and then marry her.

Allow the students to finish the banquet. If you have not served food from Bible times to your students before, you may want to have someone explain to the students what they are eating and some of the other common foods eaten during Bible times. (This website has a great list of common foods eaten during Bible times. Websites change frequently so feel free to find better sources for information if this site has changed.) If time allows, discuss with students why Laban may have acted the way he did and how Jacob, Leah and Rachel must have felt.

Supplemental Activity: Although the Jewish Feasts were not started by God until long after the time of Jacob, have more advanced students research them. How were they celebrated then and how are they celebrated by Jewish people now?