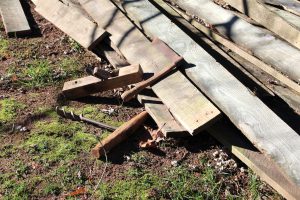 Guiding Question: Why did it take Noah and his sons so long to build the Ark?

Procedure: Review the story of Noah. Discuss with students the size of the Ark and it’s sea worthiness. Using a scale of 1 inch = 1 foot (1 cm = 1 meter), encourage the students to build an Ark to scale of the one in the Bible (about 450 ft x 75 ft. x 45 ft.). Since the exact shape of the Ark is unknown, the students can use the shape of historic or modern closed ships for design. After the students have been working for about fifteen minutes, stop them and have a class discussion. (Note: Finishing the scale Ark will take multiple class periods should you choose to do so.) Ask the students what would have happened had they been asked to build a full sized Ark? How long do they think it would have taken them? What challenges would they have? What challenges might Noah and his sons have had? Inform the students that most scholars think it took Noah and his sons about 75 years to complete the Ark. Point out that without God’s design, it is unlikely Noah and his sons could have built an Ark that would have held everything and withstood the flood.

Supplemental Activity: Have students set up an exhibit to teach younger students about Noah and the Ark. It could include a scale model, model animals to teach children about the different numbers of clean and unclean animals on the Ark, etc. Your students may even want to write and perform a drama or puppet show to reinforce what they have learned and teach it to younger children.