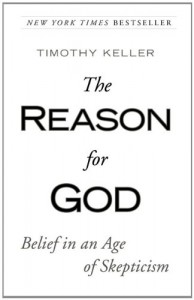 You never hear it discussed much, but one of the roles a Bible class teacher can play is the fielder of doubts. Sounds scary, but study after study has shown doubts do not turn people from God – unanswered doubts do. Many parents and teachers discourage kids and teens from ever expressing their doubts. It is as if everyone believes once the doubt is spoken out loud it becomes real and unchangeable.

The reality is most doubts are caused by things kids and teens hear on television or in school or read in books. The vast majority of the people who place these doubts in their heads are themselves using faulty information or logic. Someone with decent training in logical fallacies can often point out these problems and easily help young people overcome their doubts.

The problem is most of us have little if any training in those areas. So we avoid those discussions in fear of “messing them up” in some way. A friend suggested I check out the book The Reason for God: Belief in an Age of Skepticism

by Timothy Keller. She was right. I absolutely loved this book!

Keller is a minister in New York City. He doesn’t hide his denominational affiliation, but honestly with one (unfortunately major) exception he does a great job of leaving out denominational doctrine. He admits those are important discussions but not until the person has accepted God exists and his/her need for obeying God. Instead Keller focuses on the normal doubts and questions skeptics and atheists have posed for centuries. In every case, he lays out the argument and points out all of the logical errors or missed information.

It would be easy for a book like this to become condescending. Keller does a great job at being respectful of others, yet still being firm on the truth and the need to accept it. If you work with older children or teens, this book is a must read! Even if you have to pull it out every time a kid expresses a doubt, the resource will make your job as a “doubt slayer” much easier.

The one complaint I have is actually about material in the epilogue. It never ceases to amaze me how wonderful ministers with an obviously strong grasp of scripture refuse to admit the many times baptism is illustrated as necessary for salvation – a demonstration of obedience and faith (not a “work” earning salvation in some way). Keller stops with repentance and faith and doesn’t mention baptism in any respect as a part of becoming a Christian.

If you don’t read that part of the epilogue (or just consider it incomplete!), this book is one of the best I have ever read on the subject of addressing doubts. If you read it, I would suggest doing like I did and flag the pages addressing the statements you have heard or read over and over. Some of his counterpoints are brilliant and sometimes unique in the way he expresses them. It is definitely a tool you need in your teacher’s toolbox.

Unlike most of the other books I review, I had to buy this one with my own money! It was worth every penny. An affiliate link is included for your convenience.